(a small excerpt of the cruise report by Herbert Klyszcz for the club magazine Tallshipfriends.eV)

Day 1 - From Kiel to Sonderburg

The end first. It was a perfect sailing day. At 12 o'clock check-in was announced and at 14 o'clock we were supposed to sail out. Apparently all the trainees were obsessed with being the first to get on board and so the Artemis was already completely occupied at 12:30 and we could sail directly. As soon as we left Tiessenkai and passed Laboe on starboard side, the first sails were set. It did not take long and the engine fell silent.

With wind forces around 6, in gusts sometimes 7 to 8, we plowed through the Baltic Sea under slightly cloudy skies. We heeled slightly but very calm and stable to starboard. The destination for the day was Sønderburg, which we reached punctually at 7 pm. We arrived at the quay directly in front of the bascule bridge wrapped in the yellow jersey, where only the day before the 'Tour de France' had started. Our astonishment was not bad, when a music band stood at the ship and the harbour master welcomed the Artemis first by announcement and afterwards as a band master also musically. Our applause and numerous onlookers accompanied the performances, mainly American swing.

After a stroll along the promenade to the castle (now a museum) we ended the evening in the mess hall with entertainment, beer or wine.

Breakfast, from jam rolls, scrambled eggs with ham or salmon, crab and caviar left nothing to be desired. On a luxury cruise ship it could not have tasted better. And the freshly baked rolls did the rest.

After some clouds and light rain, the sun came out again. Around 10:45 we said goodbye to Sønderburg and shortly after leaving the harbor area the engine was off again and we sailed under full sail. Aiolos did not mean it so well with us at first, so that we bobbed along with just 2.5 knots. In the afternoon finally a little breeze came up and we made then nevertheless still brisk speed. The same wind that made us happy while sailing caused big problems in the evening when we wanted to moor in Lyø Havn. It kept pushing us away from the quay. Several attempts to moor under howling rudder failed. Until the captain of the Jantje, an already moored sailor, unceremoniously launched the dinghy to help carry the ropes between the Artemis and the mooring. With various joint maneuvers it was finally done. Afterwards the Jantje lay down next to the Artemis and both spent the night together.

Today it does not need many words. Like the day before yesterday, this trip was perfect. The whole day under full sail with sufficient breeze and stable 6 knots through the Baltic Sea. Enough white fair weather clouds loosened the blue sky picturesquely. Sailor's heart, what more do you want!

We used the morning to visit the Maritime Museum in Marstal on the recommendation of our captain. Many interesting exhibits from several centuries were offered, some film documentaries, but also pictures of every kind. From ancient photos to the very large oil paintings. It was an interesting excursion into the old sailor times.

Punctually at 11 a.m. we cast off again for the last leg and already at 11:12 a.m. the engine was quiet again and we sailed. The trip seemed to be pleasant. The weather forecast sounded promising. But it didn't take long, gusty wind came up and the Baltic Sea showed its unpleasant side with the notorious short waves, which have made many a sea bear turn green and yellow in the face. Also with us not all fellow sailors were spared and from the lunch remained more than usual. Not everyone wanted or could leave the bunk. But the hardy ones did not miss the opportunity to sing one sea shanty after the other in the afternoon. It was a great atmosphere on deck. Due to the brisk sailing we were back at the starting point in the early afternoon and could moor at the Tiessenkai. It was temporally and after nautical miles my shortest trip, but after 3 years of forced break again a nice experience.

As a fellow sailor had promised to the general amusement on the question how she and her husband had come to this trip: "Through Parship! Well, I found a grain of truth in it. Because sailing can become a second partner, as it happened to me 23 years ago. 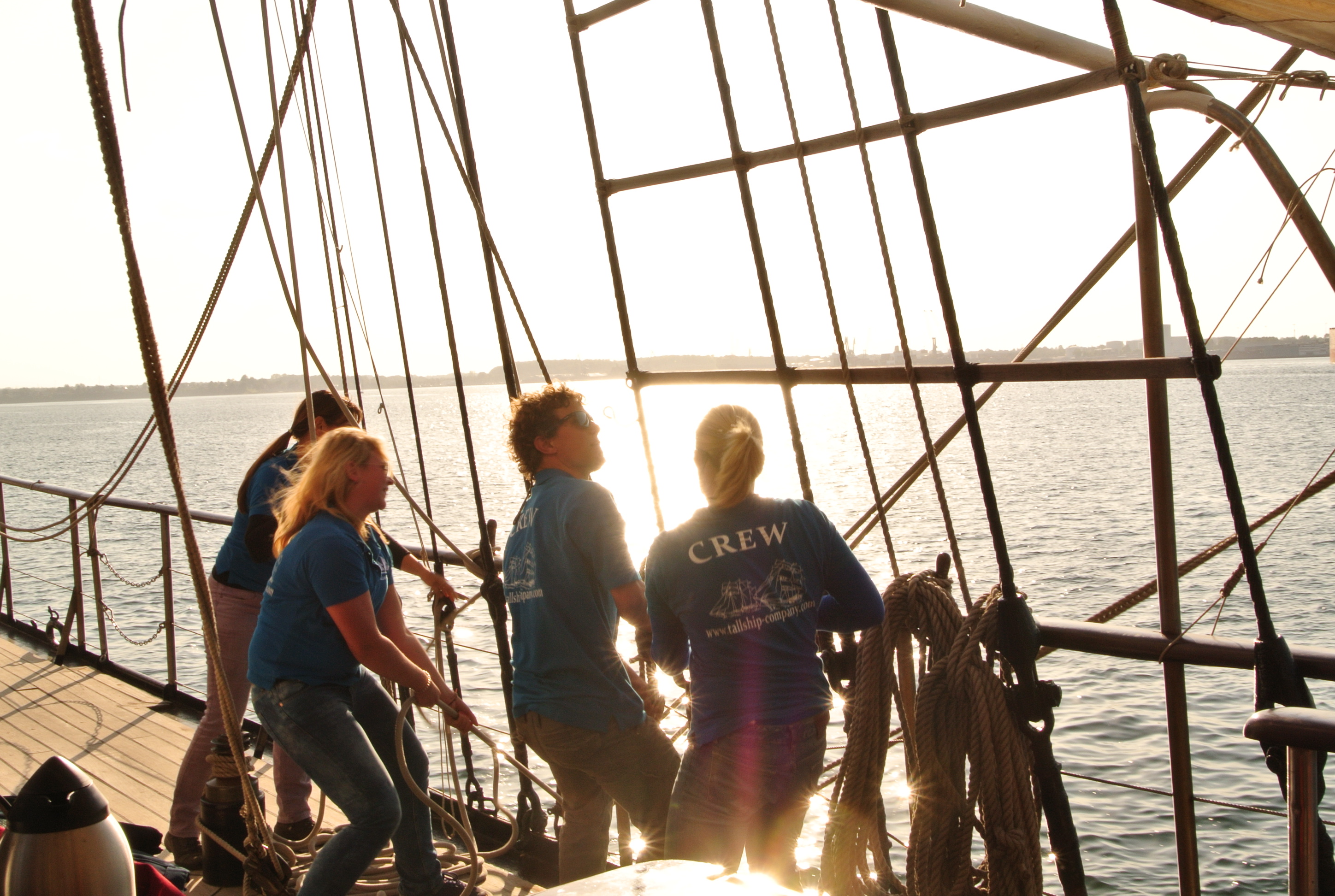